Destined by Aprilynne Pike
My rating: 3 of 5 stars

Well,what can I say about this book...have got a mixed feeling here! whereas there very less actions in first two books and nothing at all in third book.. I was disappointed..The first theree was filled with discovering , experimenting.. and suddenly the fourth book was only action action ! no stopping for something else! the battle were fought ,fairies died!! But It was like an adventure ,not much romance in it.. I was happy to discover that Lauren was not afterall a shelfish,dependent girl,,she took good desicions,proved herself to be very brave withot an help of others!! This book was more of Tamani and David proving themselves.. the ending was though bitterweet but I liked the way it ended!! Just one thing I wanted to know what happened about tam and Lauren after 15 years.. we only came to know about David and Chelsea... but overall The series was light and a goodread..just like a fairytale...
I liked the pace of story too!!

View all my reviews 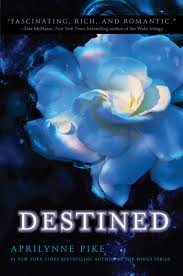