Blog Tour- Fealty to the King:Children to Cain by Milo Swanton

FEALTY TO THE KING: THE CHILDREN OF CAIN BY MILO SWANTON BLOG TOUR
( 1st December to 5th december,2014) 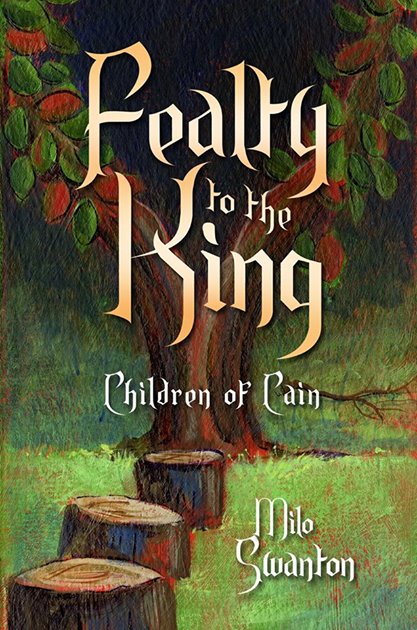 As the fourth son of the former clanlord of the Herkt, Brutez wasn't meant to rule. But finding himself in conflict with the violent current leader over a captured enemy warrior, he challenges the clanlord for leadership, and changes his destiny.

Brutez is soon drawn into the wars among the neighboring clans and tribes. He has a vision for a unity they've never known, but peace comes at great price. Warfare is dangerous, and politics are even deadlier.

Fealty to the King is a sweeping, epic tale of warrior clans and tribes. Of discovery, knowledge, and faith. Of the founding of a nation. Of greatness.

(Add your review if reviewing or remove this)

“We have a hundred warriors,” said Vinlon. “We’re going to Ranjin.”
“Tribemaster, we shouldn’t.”
Vinlon was angry. “Why not, Jaspich? Look what they did to your family’s house. They killed your father.”
“Nobody will stop the Herkt from reaching Fenzdiwerp if we go to Ranjin.”
“You’re like your father, not wanting to counterattack.”
Angered, Jaspich no longer withheld words. “If you had listened to my father, Habergenefinanch wouldn’t be this incinerated ruin.”
Vinlon thrust forth his chest in a challenge. “You speak bold words to your tribemaster.”
The menace in his voice chilled Jaspich, but he refused to relent. “You’re tribemaster, but you told me I’m the next one. I know you intend to treat me as a son. If you want to be my new father, you must listen to me.”
Vinlon said nothing, staring Jaspich in the eye. He looked down Jaspich’s tensed body to the young man’s feet and back to his face. “I chose well.” He allowed a smile. “You’re not intimidated against speaking your thoughts, even after I threaten you. You’re worthy to advise me, so speak, and I’ll consider.”
“I share your desire for revenge, Tribemaster. How can’t I? He was my father!” Jaspich considered that Lady Gernthol burned Habergenefinanch merely to avenge her father. How would the cycle of revenge end? “This was my town as much as for any Warnek, but we should do what’s best for the tribe. Let’s send a force back to the Pultanik River to defend Fenzdiwerp. Let’s take as many of these good people we can to Pultanik. We’re going to need the fortress we’re building there.”
“I know we should do as you say, but I want vengeance.”
Jaspich knew Vinlon needed an argument to convince his heart as well as his mind and was glad he had one. “You heard the carpenter back there, saying your lady wife wants to kill you. If we go to Ranjin, you’ll have to kill her. Do you want that?”
Vinlon didn’t need to speak his answer. It was written on his face for Jaspich to read. He still loved the woman.

Warlord Druogoin lingered before Vinlon, blocking the way to the tribemaster’s warriors. He asked, “When did you start paying ransoms, Warnek?”
Vinlon had no answer.
“A travesty you didn’t start years ago,” said Druogoin.
Not my fault, Vinlon thought, but nothing he said would convince Druogoin to relinquish his hatred, and he passed this contempt to Gernthol, his daughter who was Vinlon’s wife, and she passed it to her children.
Vinlon’s silence agitated Druogoin. “You have nothing to say, Warnek? If Hoj wasn’t my grandson, I would kill him to take away your son from you, but I’ve taken him already, haven’t I? I have your daughter and wife, too.”
Vinlon’s arms shook, ruffling his black ribbons. The man better shut up.
Druogoin didn’t. “Do you know why Gernthol allowed Thigrel to be a woman with Pokyer?”
Vinlon didn’t know, and he didn’t care. He only wanted Druogoin to shut up. He walked around him to leave. The warlord dressed in garish orange stepped sideway, and they bumped shoulders.
Druogoin sneered into Vinlon’s face. The warlord’s breath smelled like onions as he kept speaking. “She tried him first, and when he performed well, she couldn’t deny Thigrel the experience.”
Shut up!
“Don’t be shocked, Warnek. Did you expect your wife to give up pleasures when she gave up you?”
Vinlon couldn’t get away from Druogoin fast enough, and then a revelation struck him. They were alone. Their nearest warriors were no less than one hundred cubits away. This was an opportunity he might never get again.
He tossed his pennants at his antagonist. While Druogoin batted away the poles, Vinlon unsheathed his sword, the prodigy of Banshim’s anvil: sharper, lighter, and balanced—lethal. The multitudinal-honed blade shimmered glaucous blue in the sunlight. It was virgin steel, never before used against flesh because Vinlon didn’t engage in any swordplay against the Jatneryimt. His sword would know pleasure, consummated with his wedlock father’s blood.
He swung up one-handed, intending to slash off an arm, but one pole still was falling to the ground. The sword sliced through the loose wood stake as though it was a marsh reed, but the blow deflected into Druogoin’s side, and the warlord’s orange-padded gambeson absorbed most of the impact. Druogoin drew a longsword while stumbling backward.
This first parry turned them around, so Vinlon saw the Druogoinyim warriors collecting their new armaments. They noticed the combat and ran closer. The time of opportunity was getting short. He swung low. The blade was so light, sailing through the air like a bird’s wing. Druogoin met the blow with his thick heavy blade before Vinlon would have severed him at the knees. Vinlon whirled up and around. Druogoin’s sword was too sluggish to follow. Vinlon came across with a backhanded slash, and his blade gashed through Druogoin’s neck as easy as through a melon. The head lolled into the air, squirting blood from the sneering lips, and dropped to a cushioned landing on the meadow grass. It was a sight Vinlon would replay in his mind countless times with satisfaction.
The Druogoinyim warriors were almost upon him, but his warriors were closing, too. He regretted not having time to claim Druogoin’s sword or head as prizes before he ran to join his ranks, holding his bloodied bluish blade before him. Reaching his men, he turned to face the enemy. Some Druogoint stopped at the head and body of their slain warlord. The rest trailed, hauling their booty.
Radzig came to Vinlon’s side, wielding his hatchet. “I don’t think they’ll fight.”
Vinlon agreed and ordered his warriors to halt. Sure enough, Nelber retreated eastward with an armload of bows, beckoning the other Druogoint to go with him to the hill marking the border of their territory. A brawny warrior hoisted the warlord’s headless corpse over his shoulder. Blood drained from the severed neck. Another Druogoin took the warlord’s sword, impaled the head on it, and went with the others following Nelber.
Vinlon planned to lead his warriors in the opposite direction to Fenzdiwerp, but first he needed to clean his weapon, kneeling to wipe the blade on the meadow grass. He had a name for the consummated sword, a worthy name—Shut Up.

The clanlord led a mounted column of twenty warriors. They followed a hard-packed path along the northern bank, the same side as the upcoming town, never needing to cross the river since leaving Taubueth two days ago. Brutez often rode with his friends, Jonerch and Gordib, but invariably he found Larboelm nearest him, holding the staff with the iron blooddrop. He ventured to learn more about the bodyguard he inherited from Vulrath and Klinteg.
“This is the town where you were a boy?” Brutez knew the answer, but the question opened a conversation.
“Yes, Clanlord.” Larboelm spoke those words more than any others to Brutez.
“What’s its name?”
Larboelm paused before answering, “I don’t remember it having one.”
Brutez considered a nameless town and a lake referenced by a description rather than a name, yet the Taubueth River had a name, the same as his stronghold. His father once told him Taubueth was a Chizdekyim name, but didn’t know what it meant. “Do you have family there, Larboelm?”
“No, Clanlord.”
A variation of his most common words, Brutez thought.
“I have no brothers or sisters. If I had other family, I never was told about them. I left for the Blue River with my mother when she went there for a new husband.”
“What happened to your father?”
“He stuck a sword down his throat, a bloody mess.”
Brutez remembered how his mother begged for death. “Was he sick?”
“Sick of life.”
“Does your mother still live at the Blue River?”
Larboelm shook his head. “Her husband beat her to death. I killed him for that.”
Brutez couldn’t decide which disturbed him more, Larboelm’s story or how he told it without emotion.
Larboelm tapped his macabre spiked mace by his leg on the side of his mount. “I mashed his head to pulp. Clanlord Vulrath saw me.”
Brutez understood how Larboelm became Vulrath’s bodyguard, and also why he became his. I’m the man’s family, he realized. The man should have more. “Do you have a woman?”
“I never thought about having one,” said Larboelm.
“You never took chances?”
“My own, yes.”
Brutez had resorted to that for many years, but he knew the ancient words. It is not good for a man to be alone. He had a worthy question for his man. “If I find you a wife, will you take her?”
“Clanlord, I’ll do whatever you command.”

Milo Swanton started writing stories as soon as he could write (second grade). His first big purchase from his paper route money was an electric typewriter.
Milo enjoys epic stories with intricate plots and lots of characters. He wrote his first novel during college after watching the epic movie El Cid and wanting to write something like it. A rewrite of this novel, The Imperial Swords, is a possible sequel to Fealty to the King.
Milo grew up in Wisconsin and earned a bachelor's degree in computer science and mathematics. His software engineering career included work on military, medical device, and air traffic control applications. He lives with his wife and three teenage daughters in Minnesota.
Contact- Goodreads-https://www.goodreads.com/author/show/8532116.Milo_Swanton
Facebook-https://www.facebook.com/fealtytotheking/timeline