***This is a new adult contemporary novel and contains sexual content and graphic language. It is not intended for young adult readers.***
A tattoo gets them in trouble… He will get them out.
After years of cultivating an undercover identity, Brody West is finally off the case and free to live a life of his own. All that time spent in the company of criminals and killers left him a little jaded… and with an identity crisis. He isn’t sure who he is anymore, or who he wants to be.
To give him time to think, he takes a few days off to go fishing. On his way out of town, he makes a routine stop at the bank and finds himself flirting with the girl behind the counter.
But his flirtation is cut short when criminals burst into the bank and shoot her right before his eyes.
In attempt to administer first aid, Brody reveals a tattoo on his upper arm. A mark that will drag him and the girl into the kind of situation he was trying to get away from. But he can’t walk away because he’s the only thing capable of keeping Taylor alive and bringing down the guys who shot her— guys who are seriously dangerous. 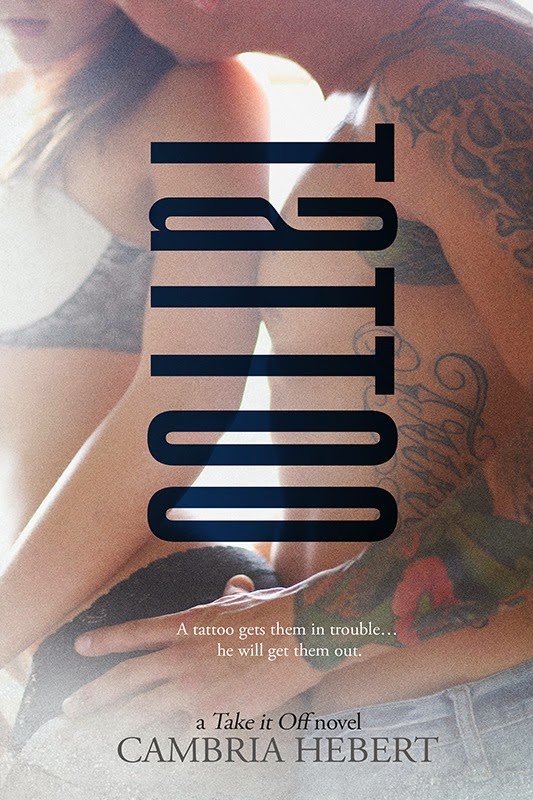 The inside of the bank greeted me with a blast of cold air and was just as brightly lit as the sidewalk outside. The walls in here were white and so were the glossy tile floors. I stepped through the roped off line, lining up behind several others already waiting. Four tellers stood behind the long wooden counter, each with their own computer.
It seemed like I stood in line forever and I grew irritated because I just wanted to get the hell out of here and onto the open road.
Finally it was my turn and I moved down the counter toward the last window on the end. I yanked my wallet and bank card, then looked up.
Suddenly the amount of time I waited didn’t seem like such an inconvenience. In fact, if I had known she was the person waiting for me at the end of this counter I would have waited longer.
Her light scarlet hair was long and filled with loose curls that fell over her shoulder and down her chest. Her complexion was flawless with the flush of fresh peaches and her lower lip was fuller than the top, making it appear as though she had a permanent pink pout.
“How can I help you today?” she asked, politely, glancing up with crystal green eyes. I watched them widen slightly and rich satisfaction flowed through me. I wasn’t pretty like her but I wasn’t completely lacking in the looks department.
“Hey,” I said, leaning on the counter with both my elbows. The movement brought me a little closer to her. “I need to make a withdrawal.”
She glanced down at the bank card and ID I extended between us and then back at me. I gave her a lazy smile and she cleared her throat, taking the cards. She looked them over and then her polished fingernails flew over the keyboard.
I glanced at her chest, being distracted by her nice rack but my eyes finally finding the nameplate pinned to the front of her top. Taylor.
“How much would you like to withdrawal?” she asked.
“Four hundred.”
She inputed the amount without saying anything.
“So,” I said, leaning toward her again. “You come here often?”
She rolled her eyes, but a small smile played on her lips. “Just the days I feel like earning a paycheck.”
I grinned. “Paychecks are overrated.” I drawled. “I’m going fishing.”
“Says the man with a huge bank account,” she quipped. Then she winced and looked up. “I’m sorry, I shouldn’t-”
I laughed. The chagrin on her face and the way her cheeks bloomed with bright pink spots was entirely amusing. “Never said I didn’t work, just said I thought it was over rated.”
She relaxed when she realized I didn’t give a rats ass that she knew how much was in my account. “You should bait your hook with hot dogs. Fish love them.”
She was right, surprise rippled through me. “You can’t tell me a girl like you likes to fish.”
“And what,” she asked, arching a red brow in my direction, “is a girl like me?” she hit a couple keys and the little dispenser to my right started flinging out cash.
“You’re withdrawal is to your right.” she said professionally.
I let the cash sit there. “Are you a tomboy in disguise?” I whispered conspiratorially. I enjoyed the emotion, the animation that played over her features. She was beautiful that was no doubt but it seemed that she also had a lot beneath that pretty exterior.
“Don’t tell anyone,” she whispered back handing me a receipt. Her teeth were really white and really straight. I got this sudden craving to run my tongue along their smooth surface.
“You’re secret is safe with me.” I tore my eyes away to pocket the cash, not bothering to count it. Oddly, I trusted her. I never trusted anyone.
Behind me a loud banging sound boomed through the room and I tensed, spinning on my heels. Four guys pushed through the entrance, each of them pulling out a gun.
I couldn’t even get away from this shit on vacation.
Adrenaline spiked my system and began pumping through my veins and accelerating my heart. It didn’t take an idiot to guess why they were here. This was a bank and they had guns. I looked over my shoulder at Taylor who was watching the men with wide eyes.
“Get down!” I ordered quietly. “Hide. Hide good.” 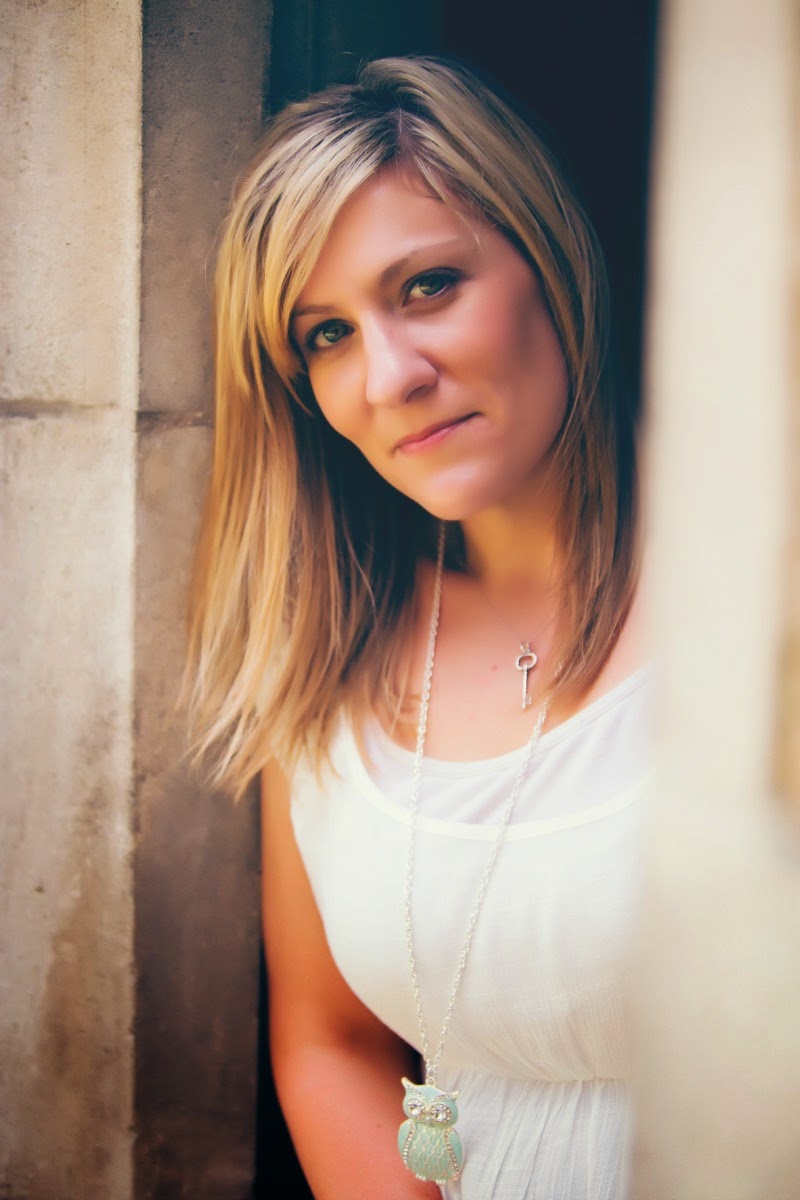 pinterest / goodreads / facebook / website / twitter
Cambria Hebert is the author of the young adult paranormal Heven and Hell series, the new adult Death Escorts series, and the new adult Take it Off series. She loves a caramel latte, hates math and is afraid of chickens (yes, chickens). She went to college for a bachelor’s degree, couldn’t pick a major, and ended up with a degree in cosmetology. So rest assured her characters will always have good hair. She currently lives in North Carolina with her husband and children (both human and furry) where she is plotting her next book. You can find out more about Cambria and her work by visiting http://www.cambriahebert.com 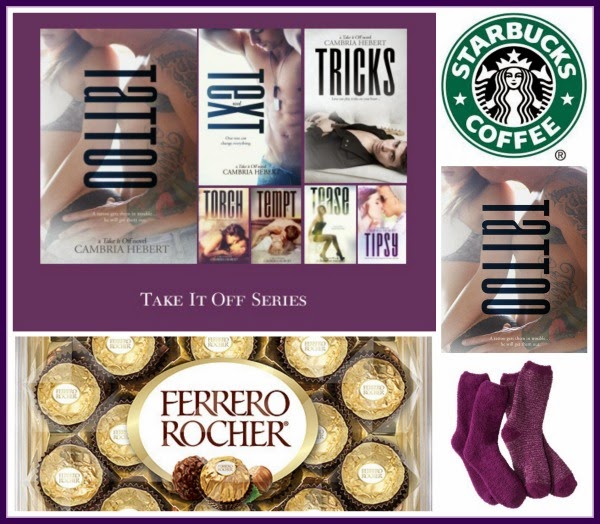