Title: Intractable Souls
Author: Tricia Daniels
Release Date: October 17, 2013
Genre: Erotic Romance
Synopsis
It’s been years since brilliant IT consultant Olivia James, fell for a man who had a deeply hidden compulsion to violence and control. Left healing physically and emotionally, she became a shadow of the confident woman she used to be. That is, until she meets Ethan O’Connell, a man who makes her burn with a powerful desire. Haunted by fear and insecurity, she desperately tries to resist him, doing all the right things to protect her heart, but she is betrayed by her desires and her attraction to confident men. With stubborn perseverance, he ignores her attempts to push him away, leaving her wanting, desiring his love, needing it to feel alive and whole. Ethan O’Connell is extremely successful in his businesses, with a seriously sexy Irish accent and a lethal kind of flare and charm. More than any one man should ever possess. Ethan knew, from the very first moment that he saw her that she is meant to be his. Used to getting the things he wants, he is determined to have her and struggles to control his Irish temper, the reason for his own troubled past. Olivia James is the woman that makes him want more, the kind of girl that would make any man think about forever. Afraid that he can’t live without her and unwilling to lose her, he hides his secrets and ignores his dark desires and fantasies of control. Eccentric Psychic, Eva Storm is drawn to the energy around them. She knows that they are soul mates bound by past lives and helps the universe steer them together. Ethan is hesitant to believe at first, but there are things he can’t ignore. Things he couldn’t possibly know, but does. Neither of them can deny the dreams and memories that they both share, but Olivia is too afraid to believe and not willing to trust her heart. Convinced that she is “THE ONLY ONE” for him, Ethan refuses to walk away, vowing that he will never give up on her, even if it means he has to fight hard enough for both of them. Can he control his temper and his needs in order to keep her in his life? Can she heal her past wounds and let him in? Like no other woman in his life, Olivia challenges him with her strong will and sharp sense of humor, making him wonder if she could ever become a willing captive of his dominance. Ethan hopes with all his heart that she will become equally addicted to his love, and a sneaky suspicion that falling in love with Olivia James is about to bring on a shift in the balance of power in his world.

Buy Links
Amazon ~ Amazon CA ~ Amazon UK ~ Amazon AU ~ B&N
Smashwords~ Kobo ~ iBooks US ~ iBooks CA ~ Indigo
Book Trailer
[youtube=http://www.youtube.com/watch?v=20YS7eq-b7E]
Excerpt
Following, Ethan moves to her side, putting his hand against the trunk just above her head. His body pressing against her side makes her heartbeat quicker and her face flush. Breathing in her perfume, he becomes intoxicated by its sweet, seductive scent and lifts his free hand, wrapping it around her waist holding her there. His incessant stare is daunting, forcing her to look down, trying to avoid it. Christ, this woman is so beautiful when she tries to hide the way he affects her. Aware that his closeness makes her uneasy he presses his mouth against her ear and gently nips at her lobe. The warmth of his breath expelled heavily into her ear gives her goose bumps. Noticing her reaction, he moves his hand from her side and rubs up and down her arm trying to warm her. “Are you cold?” The muscles in her stomach tighten and her chest heaves as she inhales quickly. “No.” She shakes her head. “What then?” He knows what… he just needs to hear her say it. She looks up at him through alluring hazel eyes. “You.” “What about me?” Is it cruel that he needs her to confess? Torment her by making her say it aloud? She lowers her eyes again and whispers. “I hate you.” His hand stills on her arm and then moves back around her waist. His forehead pressed to the side of her temple he answers. “I don’t believe that’s true at all.” He slides his hand to her hip, tugging her as close to him as possible. Bringing her hand to her mouth, she bites at her fingernails nervously. Her stomach twists in anxious knots as she lays out her feelings. “I hate the way you make me feel.” She concedes. He inhales a deep breath and lets it breeze out warm and slow against her ear again. Finally he gets to the truth. Capturing her hand, he pulls it down, away from her mouth. Not feeling the need to control or overpower her in this moment his voice is gentle. “Look at me.” Trembling with vulnerability, she turns so they’re chest to chest and raises her eyes, locking his gaze to hers, green to hazel, the soulful energy of their connection, ineffable. “How do I make you feel?” His heart is beating with a strange wobble, nervous about her answer. “Frightened.” She pauses and swallows hard, exhaling as she whispers. “Excited.” Her voice is full of shame at her admission. “I see.” Lifting her hand to his mouth, he kisses each of her knuckles one at a time. Closing her eyes, she escapes his stare for just a few moments and gathers her thoughts before speaking again. “You make me feel like I’ve lost control… of my thoughts… my emotions.” “Is that so bad?” He presses her palm to his chest so she can feel the rhythmic beating of his heart. “You’re not the only one who feels that way. The moment I saw you… my heart beat your name.” Damn him and his ridiculously romantic side, she’s never going to survive it. “ I…I need to stay in control.” Her words are burdened by fear. His Irish brogue suddenly becomes thick and Irishy. “Sweetheart you are no more in control of what’s happening between us than I am. Whatever this is… it has its own destiny and we can merely follow its path, give in to its force… bend to its will.” Olivia is lost. Lost in his eyes. Lost in his words. Under his spell... and hopelessly ALL IN. Moving his hands to her hips, he squeezes them, pulling her closer. When she’s pressed up against him, he lifts his hand to her face. Her breathing is shallow and her nerves tingle with the anticipation of his next move. Kiss me, just kiss me already. 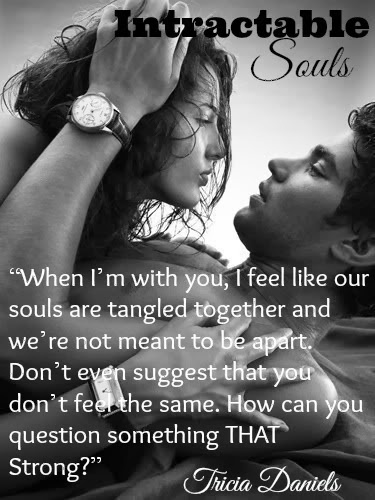 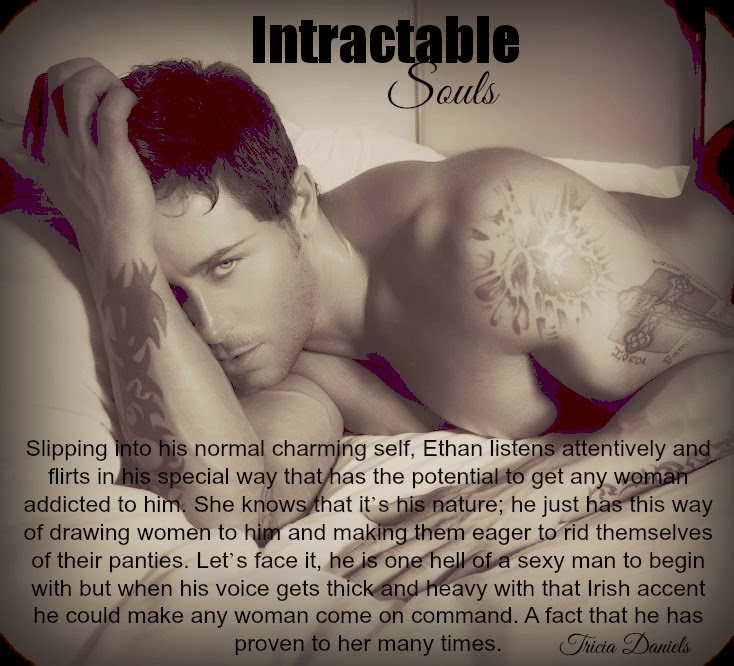 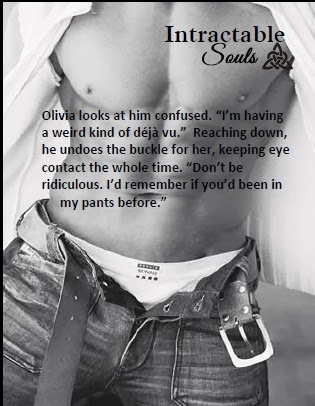 About the Author
Tricia Daniels lives in a small town in Southern Ontario, Canada, where she raised three kids as a single parent. Creativity and imagination is something there is never a short supply of in her home. Between her quick wit and wicked sense of humor she found that she has a passion for writing steamy romance novels. Her goal is simple, tell her story, warm a few hearts, shed a few tears, share a silent chuckle, and occasionally, make people blush. That's the official version. But the simple truth is... I'm just a normal woman, struggling to pay the bills and trying to raise my kids in a home where they feel empowered, supported and loved.