Review-Back Up by A.m Madden 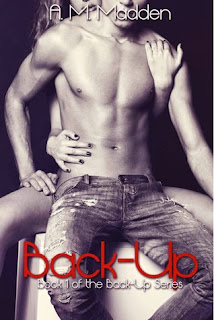 Leila Marino’s biggest dream is to become a rock star. A lucky opportunity has her auditioning with an up & coming rock band named Devil’s Lair. The band hires Leila as their back-up singer, signing her up for months in the studio and touring on the road with the sexy bunch.

Jack is the quintessential rock star…gorgeous…sexy…a walking orgasm. Jack Lair is the lead singer of Devil’s Lair and his dreams are becoming reality as his band climbs the ladder of success. He’s living the perfect life, and enjoying every minute of it. With a steady stream of sexual conquests that satisfies his raging libido, he thinks he has all he needs in life…until Leila enters it.

Jack is not prepared for the sudden pull he feels towards Leila, and struggles daily to deny his attraction is anything more. Leila finds falling for her new boss is constant torment. Both convince themselves friendship is their only option.

Review by Gabrielle Dominique
Minor spoilers are there :)
Prepare to be blown away folks. This book just got into my system and I can't get enough of it. The story speaks
of dreams, opportunities, friendship, love and steaming hot sex. It has the right blend of emotions and the
consistency of the story makes it captivating to read till the end. The author makes the characters easy to
understand. You would instantly fall in love with the protagonists and their attitude. The humour is present, I
had my ass laughing in some sarcastic come backs and flirting-gone-wrong (just a few though).
I would tell you now. Jack is a slut, our male protagonists. He has issues with his raging hormones since he was
young that’s why he can't get enough of any women's company (as long as she’s hot, and he prefers brunettes).
But I tell you what I can't get enough of his long and muscular drool worthy body with bulging biceps,
spectacular upper torso and.. I’ll leave the other attributes for you to explore (hah). At first I'm annoyed by his
sluttiness because damn he is like cheating even though he hasn't yet concluded his feelings for Leila. Of course
being a reader you would already know that this guy will end up loving this girl so they must be together from
the start but NO. The author shows us a glimpse of what this guy can do and will do to relieve his itch which is
kind of "No your dick will be curse if you do that.. Staahhhpp" (just kidding). Frustrating I say. But you know
every guy has his match and it sometimes takes a girl for him to change and see the other side of things.
Who is this girl anyway? Well I introduce to you people, Leila Marino. She is described in the story as a perfect
girl, with all her beauty and talent. She has been surrounded by love since she was a kid, great pack of friends
and her dreams being supported (kinda) by the ones she loves. She has some issues with cheating, thanks to his
ex. When Jack and Leila met during her audition as a backup singer of Devil’s Lair, the attraction was already
there, though it was more emphasize on Leila's POV. She is just perfect for Mr. CCDS smile, that’s what she
calls him (read the book to find out its meaning, if you don't know it yet). I can't say that she has insecurities but
the way she asses some girls leaves me thinking that maybe she has, well girls will be girls. She usually let logic
work but when arousal takes over then fuck logic. She starts to stare and fantasize or any hormones-induced
female would do. Who would not anyway, when Mr. Sex on Legs is in front of you.
The first parts of the story kinda bore me. It is not actually boring but it was uneventful in a way that I thought it
will start at Jack and Leila's involvement to each other in a full blown way. Instead, there are lots of
introductions of Leila's band mates, friends, family and some extended characters. Those are not just brief
introductions, she tells stories about them so few chapters are long because of those. Same as Jack (not really).
But as the story advance you would find out that every one of them has involvement on what is happening.
Those band mates and friends are fun to have. I’m glad they are there because they added life to the story. So
just continue rowing the pages. As for Jack and Leila, they had this love/hate relationship . I'm surprised at how
they keep their "horniness" at bay. Well, keeping those feelings actually
triggers things at some point. So things that are not expected to happen just happen. All in all as cliché as it is, I
don't like it, I LOVE it. Finished in one sitting and recalled many times what just happened because damn their
profound love is being tested... You guys should
read this and experience the rush of emotions this book offers
Posted by Fallen For Books at 16:08