Evie’s always thought of herself as a normal teenager, even though she works for the International Paranormal Containment Agency, her ex-boyfriend is a faerie, she’s falling for a shape-shifter, and she’s the only person who can see through paranormals’ glamours.
But Evie’s about to realize that she may very well be at the center of a dark faerie prophecy promising destruction to all paranormal creatures.
So much for normal.
“A fast, flirty roller coaster of a ride. This story was everything I hoped for—sassy, light-hearted and downright scary. Oh, bleep! I’m in love!” (Becca Fitzpatrick, New York Times bestselling author of Hush, Hush)
“Strong characters, a clever premise, and a hilarious voice all team up to make PARANORMALCY the most refreshing paranormal debut of the year.” (Lisa McMann, New York Times bestselling author of the Wake trilogy)
“Kiersten White creates the perfect blend of light and dark. Even as the stakes rose higher, PARANORMALCY’s narrator, Evie, kept a smile on my face with her cunning wit. I can’t wait for more!” (Carrie Ryan, New York Times bestselling author of The Forest of Hands and Teeth)
“Paranormalcy seduced me. The two sexy paranormals who vie for Evie’s affections each had their own victory; one won Evie’s heart and the other won mine.” (Aprilynne Pike, #1 New York Times bestselling author of Wings) 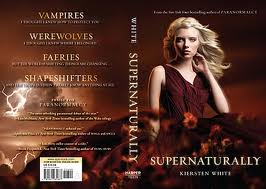 A New York Times bestseller, a Publisher’s Weekly Flying Start pick, an Indie Fall 2010 Next List book, a Junior Library Guild pick, a YALSA Teen Top Ten nominee, a Florida Teens Read! selection, a Utah Book Award Finalist, a Whitney Award Winner, and a book described by my four-year-old as being a “rectangle.”http://www.kierstenwhite.com/paranormalcy-series/
Posted by Fallen For Books at 08:40